This quote and concept came about during philosophical conversations regarding perception, judgement, instinct, and training humans acquire regarding things that are unlike ourselves.

In its simplest form, we can see that many (if not most) humans have less regard for living things as the difference from ourselves increases.

We feel & espouse sympathy, empathy and compassion rather easily when it comes to humans. Victims of natural disasters, underprivileged children, diseased or starving people, those under oppression.

We tend to think in similar ways when it comes to other primates. Chimpanzees and orangutans…”they’re so like us”.

We have close affinities and strong affections for the mammals that have chosen to cohabitate with us, with rules and exceptions. We can love dogs or cats and invite them to be members of our human families, living with us often for many years. We can have similar relationships with horses. But not cows. Not sheep. Not Sika deer or chinchillas. Those are “livestock”. They can’t come in the house and may or may not have names, but they are too different from us to receive the same treatment as a human child, a puppy or kitten.

Some folks have pet parrots. Parrots can talk to us, call us by name, and live about as long as humans (up to 70 years). Why are they not more popular? I can only wish my dog could talk to me, and frankly sometimes I think he’s trying.

I suppose some of this is close to the “Perspective” chapter of Armchair Zen Philosophy. Why are dogs living in the house, cats sleeping in our beds, parrots perching on our Soft Chair and ferrets playing with their ball in the living room while the cows are out in the barn and the chickens are in the coop and the rabbits are in hutches?

Bison are not like us. Let’s kill all two million of them on the Great Plains. For money.

Gorillas are not enough like us, so let’s poach them and cut off their hands. For money.

Insects and reptiles are so far from us they don’t even count on the cosmic scale of respect for other life forms. I’ve watched so many humans mindlessly step on a spider, an ant, a squash bug, an earthworm. Why? When it would be just as easy to ignore these and walk away, we are compelled to kill it if it’s not like us.

I did my share of this mindless killing and destruction prior to seeking the path of enlightenment. I’d send money to save the children or save the whales or save the wolves while simultaneously poisoning mice and spraying insecticide and herbicide. Does that make any sense? In a human way, yes, but in a cosmic way, no.

I am a child of the cosmos, no less than the trees or the stars. I was quite a way down the path before I realized that the trees and stars are no less than me. In Armchair Zen, we have a term called universalism. This represents the understanding and philosophy that no one thing in the universe is more important than any other. It takes mental effort and will to embrace the idea that termites and rattlesnakes, box jellyfish and ticks, kudzu and eucalyptus, smallpox viruses and plankton are all children of the cosmos, and no less than me.

It’s still a wonderment, still a puzzlement, still baffling to try to understand humankind’s penchant to pick and choose, even within closely related biological families.

Sometimes these judgments are entirely projected on the victim species. Hummingbirds are beautiful, we fill feeders to attract cardinals and red-winged black birds, but crows are a nuisance, pigeons an eyesore. Talk to someone with a bird feeder and you may get a feel for their level of tolerance and condemnation. The blue jays are hogs that steal the birds’ food. Grackles are selfish and nasty, cowbirds crowd out the little sparrows. Wait…how can jays steal the birds’ food, when the jay is a bird? And why is being a “hog” a bad thing?

Watching the BBC documentary Planet Earth, I received a great Zen lesson that orbits near this topic.

We watch a rocky shore full of birds in a desolate landscape as they guard their newly hatched brood. Stalking the flock is a fox. We’re enamoured and impressed by the birds as they work together to fend off the fox. The fox slinks around and tries this way and that to get close to the easy lunch of flightless fledglings. We cheer as the birds drive off their foe. We identify with the birds’ fear and panic and bravery as they protect the very lives of their offspring. After a minute of watching, we curse the fox. Bad fox! Trying to kill the cute, fluffy, downy hapless chicks!

After witnessing this agony of nature longer than we’d prefer, we watch helplessly as the fox seizes an opening, darts in, and grabs a screeching white baby bird by the neck as its parents frantically try to save their little one. We watch the fox gleefully trot off with its ill-gotten gain. Our hearts go out to the birds, their loss. Fox seems pleased with itself. Four paws, sharp teeth, mature speed and agility…against birds without talons, with the rounded beaks of waterfowl, bound to earth by their flightless charges…this was not a fair fight. By now, Fox is almost evil!

In the next moment, we watch fox stride up the beach and arrive at a den, the bloody “baby” hanging from its hateful jaws.

Then the fox kits come out of the den to greet their mother. Suddenly, almost magically, fox is transformed from a ruthless murderer of innocent babies to a mother, putting every ounce of her 10-pound being into the effort to raise her own. Instantly, poor defenseless baby bird becomes a sorely needed meal for canine “babies”, living on the razor’s edge, trying to maintain their own survival in a harsh and sometimes brutal world. Now we feel sympathy and compassion for the birds, yet still we can identify with Mother Fox, and we harbor hopes for her brood’s survival.

The cosmos has an advantage over students of Armchair Zen.

Since all of the cosmos is the cosmos, there is nothing that is not like it.

A riddle for life 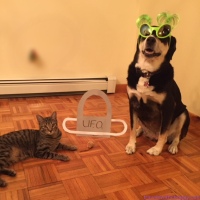