This is the second of a 3-part journal entry beginning with Off The Grid and culminating with The Storm Strikes. -Paz

Awake at dawn, I step out of our tent into a perfect July morning. The temperature hovering in the mid-60’s, a thin, misty fog covers much of the lake, the sun is just climbing over the hill to the east, and it begins to burn a hole through the magical veil of vapor. The coffee has just begun to percolate when I hear Joe’s boat motor approaching. Ryan arises and immediately begins to prepare breakfast; eggs scrambled with crumbled bacon and cheese. Within a few minutes, Sparky joins us for morning victuals, and so our day begins.

I am reminded of those August mornings, awakening on Scout Island to the sound of small waves lapping the shore, making rhythmic sounds as they strike the Honey Doll, moored with her bow facing the wind. Forty-or-so years later I still recall a morning when, around age 15 or so, I awoke with the sun and crept to my 11-foot boat The Li’l Skipper, and rowed out onto a fog-covered lake for “the morning rise”, an angler’s term for breakfast time among the fishes. As I quietly pulled in the oars my focus was on preparing baits, casting, trying to perceive any drift. There was not a stir in the air, nor a ripple on the placid water.

I looked up from my industrious activity to find I was completely surrounded by fog. There was no island, no shoreline. No boats tied up across the bay at Vandenburg’s Point, no motors pulling out of McMurray’s Boat Livery, no clamoring of bathers and boaters unfolding and consuming the beautiful summer day. Silence. I remember it like yesterday. The first time I felt truly alone, isolated and entirely one with the nature and world engulfing me. Perfect peace.

Today there is a full Saturday before us, and a lake full of fish awaiting us. We hit the hot spots and land some lunkers. By noon we have a stringer full of bass, and a surprise catch as Joe pulls a nineteen-inch land-locked salmon out of 15 feet of water. We return to camp for lunch and place our 20-pound stringer of fish in the cool lake water. I’m a little conflicted by this, keeping the fish on a chain only to await their death and consumption. It occurs to me to clean and fillet them now and put them on ice. Better for the fish and for our dinner. Alas, the lake, the sun, the water and the fishing beckons, and we return to our activities, leaving the stringer tied to a tree root, the chain gang of fish flopping occasionally. 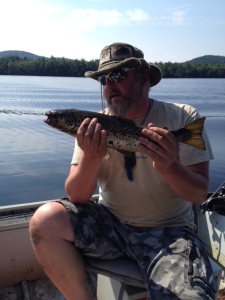 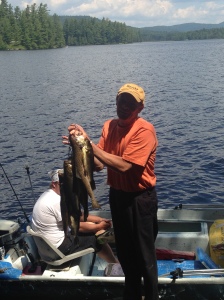 After lunch I decided to take out the Ranger 16′ canoe for some silent-approach fishing. My first cast meets with a strike and my mind turns to landing the fish, completely forgetting canoe rules. I rise slightly and snap the rod back over my shoulder to set the hook- and this is too far for the canoe. She tips, she swamps, and in a second I am in the lake. Thankfully, the flotation vest makes maneuvering easy in spite of the fact that I’m fully clothed including fishing vest, sweatshirt, long pants and hiking boots. Ryan comes alongside with The AquaMarie, and pulls the old man into the boat. Back to camp for a change of clothes, and we’re right back at it.

Folks that ply the waters of our world are always looking to the sky. Sailboats seek the wind, and we all keep a watchful eye on the cloud formations. By afternoon, the skies to the northwest held tall thunderheads just beyond the next ridge. Curtains of rain could be seen falling on those beneath, probably 20 or 30 miles away. The forecast called for a front to move through tomorrow, so this must just be the leading edge, but the wind made some hauntingly familiar wave patterns, and we could smell the rain.

We changed our dinner location from our camp to Joe’s for tonight. We wanted to fish “the evening rise”, on either side of sunset, and it would be dark by the time we arrived at Joe’s and began to clean our stringer of dinner. Ryan and I stopped by our camp to pick up the stringer and a few kitchen essentials, and as I pulled the stringer out of the water I was shocked to see half of the fish were devoured! Something had been feeding on our captive (and probably dead-by-then) fish. A few were whole, and the rest had varying degrees of remains. One just a head, one completely devoid of innards, and most upsetting, the salmon was simply gone!

We arrived at Joe’s with the sad news of his salmon’s disappearance, but we had plenty enough fish flesh to feed our tribe. Sparky canoed over from his camp, and we would tow his canoe as he hitched a ride back to camp after dark. Our boat is the only one with running lights, hence the decision to have dinner at Joe’s camp again. Chef Ryan cooked up the fish in the cast iron cookware over the open fire. A side of fresh mashed potatoes with onion, and for veggies, sauteed fresh zucchini. Served buffet style on the picnic table, we gathered around the fire for the best meal ever in camp!

Night in camp always feels like we’re going back in time. A time when people lived like this every day. It’s a big world out there, and it’s no surprise that people banded together in cave clans, and shared the warmth and safety of a fire at night. 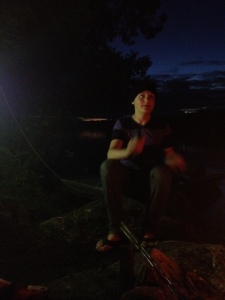 We ate our fill of the fine fresh food, lamenting the loss of the salmon and inhaling the fresh-cooked bass. Just as we were finishing our second helpings and considering a toasted marshmallow, I felt a single drop of water on my head. “Pat, pat, pat” went little taps on the leaves.

“Is that rain?” Sparky asked, and as he finished the sentence, the pat-pats picked up their pace, and the skies opened.

Next chapter: The Storm Strikes! 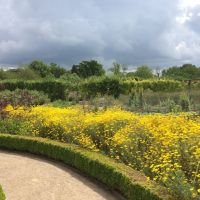 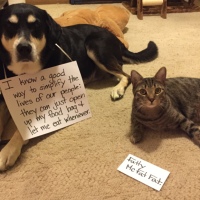