The old bear limped the last few yards along this ancient and intimately familiar path, until he burst from the thicket on the banks of his own private, secret pond. He gently eased himself into the placid pool. One step, two steps, paws sinking ankle-deep in the mucky bottom. A third step, and he was immersed to his neck. He let the chilly bath fold over him.

Washing away the mud and blood, the cool water easing the dull pains of his injuries. He drew a deep breath and let himself sink. A brief and mild stinging in the eyes, then total silence as his ears submerged. He hung there, buoyed by the water, lifted and embraced, the cold a tonic to aching muscles and fresh flesh wounds. If only he could stay here. Right here, beneath the soft, sheltering water. He drank in another moment of stillness before his lungs began to burn and pull at his instincts. He burst from the water, exhaling, and drawing a deep breath of the piney forest air. He shook his head violently to throw off the water, only to be reminded, cringing, of the pain at the base of his neck.

Directly above him, a black crow alighted on a dead elm branch.

“Gwak.” he called out as he eyed the bear.

“You’re early, Crow.” came the reply. “I am not yet dead. You cannot peck my eyes out. Not yet.” He heaved a sigh, rolled onto his back as he floated out from the shore.

He had had no intention of fighting that golden autumn day. There were far too many plump, ripe blackberries to be eaten, their canes, top-heavy with fruit, bowing to bear browsing height. He hadn’t even seen the interloper. A bear reaching maturity. Venturing forth from the safety and security of mother’s watchful eye. Time now to find his own home, establish his own territory. To begin that lifelong and never-ending process of defending one’s ground and fighting for mating rights. Old Bear had paid no attention to the sow scarfing down blueberries at the distant hedgerow. Hadn’t seen the strapping Romeo until he charged from the brush.

His countenance was immediately recognizable. After so many years, so many mating seasons, past is prologue. And here now was the latest model, the newest offering. Young and powerful, eager and energetic, bold and fearless. In his rippling muscles could be seen an impressive beast in the peak of condition. Hormones and youthful energy fueled the charge, eyes fixed and gleaming, nostrils flaring, grunting growls warning of the imminent collision.

What was one to do? There is no place in bear ethic for acquiescence, peaceful withdrawal, surrender. Almost without control he turned, planted his feet, put on his war face and prepared for the onslaught. There was no backing down or backing out. This had been his meadow, his dominion, for more seasons than he could remember. This very scene replayed year after year. Going all the way back to the day when he was the challenger on the battlefield. It was his rippling muscles, bone-crushing jaws and eight-inch claws dominating the competition that day. Not one or two, but three contenders sent running off to the safety of the wood. It would be the last day of the last Old Bear to be the Old Bear here. He would amble slowly into the forest, one long, last melancholy look over his shoulder, never to be seen again.

The first blow seemed the hardest. It shook him so, his eyes lost focus for a second, and he was shoved back onto a hindquarter, indicating the challenger topped his own weight by several hundred pounds. For his size, however, he was not slow, and took advantage of the old bear’s semi-reclining position, reaching in with huge jaws, lined with sparkling white, sharp young teeth. The first blood spilled.

Adrenaline and endorphins flooding both brains, the defender was quick to his feet. Smaller and older was he, yet to his advantage were the many battles he’d fought and won. The newcomer charged again, but the old-timer went low, nearly rolled himself at the rear legs of the upright youngster, who toppled in a cloud of dust. The old man was on him now, gnashing teeth and plunging his snout toward the neck of his opponent. A good bite and a twist, a patch of fur rent from its moorings. With surprise and shock at the pain, the younger bear scrambled to gain an upper hand. As the old bull came around for another mouthful, the younger swung his heavy foreleg equipped with razor-sharp claws. If not for a last-second dodge, the defender would have lost more than a piece of ear.

On the battle raged. Youth and strength and stamina slowly overtaking skills, maturity and aging sinew. Bound by instinct and without alternative, the aged bruin came around again and again. A third round, a fourth, a fifth. Dust and flying fur and spatters of blood surrounded the warriors. Now the young bear began to doubt himself. An anxiety deep in his gut told him there was perhaps good reason why this was, before him, the reigning Lord of the Glen, the King of this hill. Blow after blow met with resilience and tenacity and a seeming total lack of fear. He began to wonder if this was indeed worth it. Surely there were other sows, other fields, other hills, where success could be had without such exertions and pain.

The old man was tiring. Winded now, he began to rely more on wit than might. Used all of his best tricks; dodging and weaving, placing the sun behind him, throwing dirt, running circles around his foe. One by one the newcomer worked through the oppositions, continued to stand and charge as strong and fast as at the first.

“If I turn my back, he will have me.” Dozens of such back-turnings were recalled. The years he watched the rumps of the vanquished racing off to shelter and safety.

One misstep, and the blow landed squarely at his temple, almost knocking him unconscious, his vision went black. He felt himself fall to his side and roll. His sight slowly returning, all he could do was strain to see the next attack, look for the death-blow that would end this battle. The last battle. His last day to be the Old Bear here.

Suddenly, he felt the Earth drop away beneath him, as in his partial blindness he rolled off the edge of a precipice. Down into the gaping maw of the river gorge. Free falling twenty feet, he slammed onto the solid ledge of shale on his side, cracking ribs, his head bouncing off the rock before he slid off the edge of this shelf. Another twenty-foot drop and he landed on his opposite side, crashing down through Juneberry and Thistles, twisted tangles of grapevines and willow saplings, and coming to rest on the river bank. Stones and dirt and dust followed his descent and settled on and around him.

He laid there quite a while, assuming the New Bear would track him down to insure his demise and retreat. Near silence reigned over the sunny fall day. No wind stirred the leaves in the trees. No birds could be heard calling. The only sound the tinkling water a foot away. He wondered for a moment if he was dead. He rolled to his feet and was immediately convinced otherwise. Death could never be this painful. His eyes closed against their will.

When finally he awoke, the full moon was watching over him. Its soft light illuminating the trickling water, the banks of the gorge, the shrubs and trees, now devoid of color in the light of darkness. Fevered days and nights passed and merged and blended until the moon set three-quarters full, nearing the end of this odyssey.

It seemed so long ago, now in the light of day, floating in his own secluded reservoir. His secret, sacred place. Here no ill could best him. There was no sickness or injury, nor malady of the heart or spirit that could not be cured by this magical place. This is where he would choose to die. Where no fear could invade. No challengers would arrive to try to commandeer this for themselves. There would remain only the crows. Welcome friends and shareholders in this sanctuary.

And when he would finally heave his last breath, the crows would gather and mourn his passing. Perched wing to wing in silent reverie, the funeral would last from the first red light of the dawn, to the last rays of the golden sunset.

And then they would peck his eyes out.

And this would be agreeable to him, as he wouldn’t need them any more. They were welcome to them. They and the Coyotes and the Skunks and the Fishers. All the flying, hopping, running and crawling things that might regard his passing as something of a bonanza.

They were welcome to his hide and his flesh, his aged bones and cartilage, the entrails of his very core. He would need none of these. Nor the challenger or the sow, nor the meadow or the blackberries. There would be no need for sharp claws and rippling muscles, no need for the efforts of the hunt. No hunger. No pain.

There would be just this, forever.

Floating in peaceful solitude on his dear old friend, this most familiar and beloved patch of water. This wild, wet Heaven.

Suddenly, the sound of breaking branches and crunching humus invaded his dream-like thoughts. Snapped open his resting eyes, sharpened the focus of his ears, now one-quarter smaller overall since the assault. He was finally coming to finish the job, one could presume.

Coming to insist that even this distant and once-welcoming, sheltered and secure vestige was no longer refuge from all that there is in this great wide world from which to seek it.

Old Bear lay floating on his back, unmoved. Let him swim out here and drag me to shore. Or drown me.

Or pace impatiently on the banks of the pond, in a hurry to grow old faster, and be the New Old Bear on his last day to be the Old Bear here.

Cracking limbs and padding footfalls of the largest predator on the continent grew nearer, until the raspberry canes and hoosiers parted.

Old Bear would give no satisfaction if the intruder expected any sign of panic, any look of fear.

He looked up to the crow in the elm.

“Fare thee well, Crow.” he bade, as he slowly and deliberately directed his gaze to the commotion at the shore.

It was the sow.

In Days of Winter 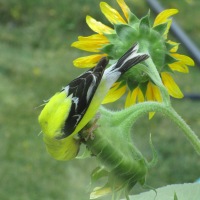 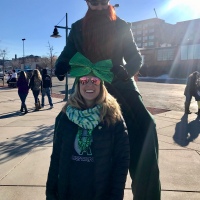