This is the second of a 3-part journal entry. To follow the story from beginning to end, read The Call prior to The Longest Ride (November 2014). The third part is One Step of Our Journey (December 2014). -Paz

Yesterday the call came. My dear, thirteen-plus year-old canine companion had collapsed. He was conscious, but couldn’t stand or walk, and a rhythmic twitching of one eye gave us dread, this must be the end of our trail. I stroked and cuddled my pup, and reminded him that he was the best ever before retiring, expecting him to pass silently in the night.

I awoke to find Chuy in the same state as the night before. His eye still twitching, unable to walk, nearly unable to lift his head.

I was prepared to sit a death-bed vigil. Discussing it with my wife, we had to admit that a dog that couldn’t walk would have no quality of life. If I sat a vigil for Grandpa, it could be weeks. At least one could sponge-bathe him. Not so with a dog. “There needs to be some dignity.”, I remarked, knowing what that meant in dog-ownership world. “I’ll need to call the vet now.”

I put it off for a while this morning. After thirteen years together, these last hours seemed utterly precious, invaluable. Once I call the vet, there will be an appointment time. An ending time. A curfew.  For me, it was as if that time would be midnight at the executioner’s.

I helped Chuy up, (actually, lifted him to his feet) and guided him out to his favorite hedgerow where he could relieve himself. Unable to stand, he stumbled in the tangled undergrowth, fell to his shoulder, and emitted a small cry. Three things he would never have done two days ago. It was heartbreaking to see such a coordinated, strong, active athletic dog reduced to this, and no doubt unable to understand any of it.

There was some small glimmer of hope as I called the Vet Clinic, made an appointment for two-fifteen. I thought perhaps we’d discover some strange malady, a fungus on the brain, some kind of allergic reaction, a reaction to poison, perhaps he found and drank automobile coolant. I grasped at any straw of hope.

Now I was forced to decide: How would Chuy spend his last hours at home?

Outdoors. No doubt. We went out, but were unable to walk around because he was so unsteady. I’m guessing it saddened him as much as it did me, as that’s always been our modus operandus. If I calculated it, it would be thousands of hours outdoors. Walking, flying R/C planes, fishing, riding to the store.

Unable to go much further, he settled on the grass just at the end of the driveway, one of his familiar posts. I suppose this is exactly what he’d want, I thought to myself. There’s no bucket list, and there’s nothing better than lying in that grass, sniffing the scents that waft through the air, keeping an eye on the neighbors and bunnies. That’s just where he’d be sitting on the hundreds of occasions when I pulled in the driveway after work, waiting for me.

Finally, the hour struck, and it was time for us to leave this place. It’s the strangest feeling to know we’re leaving, and one will never return. I carried Chuy to the van, laid him on his personal car blanket, held his water dish under his snout so he could drink.

We had to stop for gas at the convenience store. Stewart’s is the real name, but for a decade or more we’ve called it The Snack Store. Every Saturday, we’d load the trash up for the transfer station, and Chuy would leap into the back seat. He’d ride to the “dump”, the post office, and finally, The Snack Store. In his younger days he’d have a chili dog. As we aged together, that switched to Slim Jim and Teriyaki Beef Steak jerky. Folks in the store knew him, and knew the snacks were not for me. I couldn’t leave without getting him a jerky snack. To my surprise, he ate the whole thing down in usual fashion, lying on the floor of the mini van.

We arrived at the vet’s office, and I left him in the van, checked in with the receptionist.

“Chuy’s here, but can’t walk. I could carry him in if necessary.”

“We’ll see if the doctor can see him out there.” said the receptionist. “What are we hoping to do?” she asked in a knowing fashion.

“Well, whatever the doctor recommends, I guess.” We both knew, but didn’t want to say it.

It’s so strange, this place in time. Mercy killing. We’re not allowed as humans. Not allowed to stem the suffering of loved ones. We’re not even allowed to choose our own” time of departure”. Suicide they call it. It’s illegal. But somehow when it comes to pets, or dogs or horses, even deer and moose that have been injured gravely, we are expected to be able to “euthanize” them. It’s killing. You’re going to suggest I should agree to let you kill my dog. My precious puppy.

I waited outside with Chuy, in the van. Sat beside him and talked to him. What do you say to one of your dearest friends when you don’t want him to know what comes next? Death in a strange place. At least it was not entirely among strangers, though my wife stayed home, unable to face this. I wished there was a way this could be done at home. Thirteen years is a long time together. He’s helped “raise” five grandchildren.

I remembered an episode of The Incredible Dr.Pol, a series about a veterinarian, where a woman with an ailing horse received the sad news, this was a terminal situation. Dr.Pol administered an anesthetic, saying the horse would go to sleep peacefully, after which another injection would quietly end its days.

The woman to whom the horse belonged said, tearfully, that it is so hard to say goodbye after thirty years together. Thirty years. I’ve never owned a horse, but know they’re highly intelligent, and develop relationships with horse people akin to that of dogs with dog people. Thirteen years is hard enough for me.

It was important to me that I smile and speak in soft tones. Talk about the everyday as I did with my mother on her death-bed. This thing I must do for Chuy, not to him.

This hardest thing at the end of this longest ride.

It is a solemn duty, one from which I wouldn’t shirk.

He would do no less for me.

Next time: One step of our journey.

And all those who give their fragile hearts 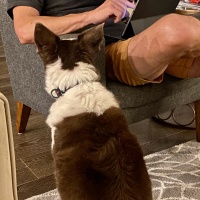 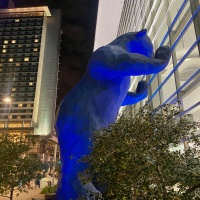