Half the world lives in places that never see snow.  Some people live in places that are never without snow! I have the great fortune to live in New York State, almost dead-center. Here we have exciting, adventurous, beautiful snowy winters. We’re fortunate also to witness a true spring. It lasts a couple of months as bit-by-bit the effects of winter fade. Red Osier Dogwood and Pussy Willows are some of the earliest signs. This year I discovered Pussy Willows on the branches in February! (We had an odd warm spell). The dogwood practically glows red in the fields as it flushes in preparation for a spring bloom.

Last fall we planted more bulbs on the south side. We placed them in the ground directly in front of the kitchen window. Looking ahead, it seemed like a good plan to be able to see these first signs of spring at our earliest opportunity. Last week, a couple of little shoots pushed their way up through the frozen soil, surrounded by snow.

The next thing to watch for is Colt’s Foot, a small, short-lived flower that looks much like a Dandelion. Colt’s Foot is the first flower we’ll see here, and usually it makes its début in late March. Looks like it will be April this year, ’cause I haven’t seen one yet. This is truly an elixir, the signal to start the bursting of spring.

Saturday, Chuy and I took our hike to the top of Nishan’s Hill. Where just a few weeks ago I needed snowshoes to traverse the trail, now there are oval slabs of ice on the grass, frozen echoes of snowshoe-footprints. Now we can step around snow and walk on the grass, hidden beneath its frosty blanket for months.

As we hiked, I was avoiding the snow. What a “new” and refreshing experience to be able to walk on grasses. To move almost silently up the trail. Chuy walked as he pleased, sometimes in the snow, and sometimes not. At the top of the hill, I noticed he was walking mostly in the snow. He loves the snow, and burrowing his nose deep within it, sniffing for rodent life beneath the snowpack. A few bites of snow are as good as a drink of water. Then he turned and looked at me with his “C’mon!” look.  At that moment, I imagined that perhaps he wanted me to be walking in the snow, sniffing and biting too.

Gleefully I stepped into the snow drift, now barely a foot deep at its best, not more than two inches where we walked. I kicked up the snow at Chuy, dusting him with a spray of crystalline water drops. He seems to enjoy that. Just another form of play. If we gently throw snowballs at him, he likes that, too.

That’s when it struck me, that this is the end of the snow. I felt a little twinge. It’s been such a long, cold winter, with record snows. We should be glad to see the snow gone. Still, the snow is our special friend, mine & Chuy’s. Snow walks are intimate affairs, just he & I. Who else would go out for a “walk” at 16 degrees with a fifteen-mile-per-hour wind blowing, snowshoeing through two feet of snow? It is the very essence of solitude.

I paused for a moment to look at an impression in the ice. Today it was not springy, at about 18 degrees (F).  Ice had preceded the snow, and in this spot I found two prints in the solid ice, like fossilized footprints in the sand. Looking like glass, there was my footprint, a boot print prior to snow shoe time. Centered in my boot print was Chuy’s paw print, perfectly rendered in glass crystal. It spoke so much to my heart that I wished I had a camera with me, to capture that image.

Chuy turned 13 in January. His once-black and tan face is half-filled with white. The top of his head, too, is going gray. Each day I spend with him, each walk in summer or winter, feels precious. Numbered.

I danced about in the snow with Chuy. I kicked up snow with my boots, he flung snow with his nose. We sank deep in soft spots and we slipped and slid over icy spots. We gave Winter, the snow, the ice, a great send-off, a bon voyage, a “See You Next Year, Old Friend”. I savored the last moments of this simple wonderment. The millions of pine needles that litter the snow at the edges of the forest. The tiny and not-so-tiny tracks in the snow. Deer, mice, rabbits, fox…maybe a bobcat. Little tunnels dug beneath the snow in the depths of the season of darkness were now revealed, looking like the canals of Mars.

On the way back, I made it a point, went out of my way if needed, to keep walking in the snow.

Back at the house, enough snow had melted to expose several squeaky green balls on the lawn. Lost to the snowfall half a year ago, now they have returned. Ready for spring.

We’re ready for spring, too. Me, Chuy, the pines and the rabbits.

Winter can be hard work. Perhaps that’s why spring has such an appeal, such excitement around the change of season.

We’re going to miss the snow.

It’s moments like this that make me look to the big picture. Savor those memories of the snow. Shining brutal winter days. Ice storms like crystals. Snow Geese. A footprint.

Cast our eyes to the spring, and try not to think about the return of the snow. Another winter. People will think you’re crazy.

In my wishful dream, we’ll all still be here when it arrives.

View From The Top

Return of the Sun 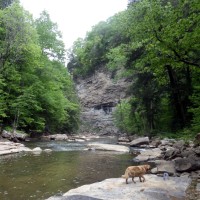 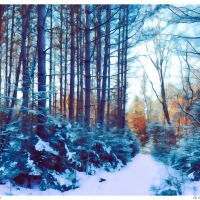 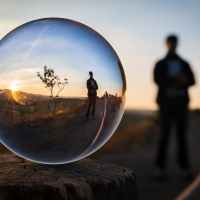